Godrevy Light is the title of the only piece of writing on which my husband, the archaeologist  Charles Thomas, and I have ever  collaborated. The book  was published  in 2009 and has done very well. Its subject is the story of this beautiful lighthouse, and the illustrations reproduce pictures of it that we had collected over the years since we first met in its shadow. 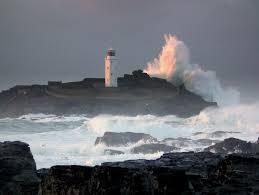 Godrevy  was not well known until relatively recently but in recent years it has become as much a symbol of Cornwall as St Michael's Mount, as you can see by looking at almost any website about Cornwall. 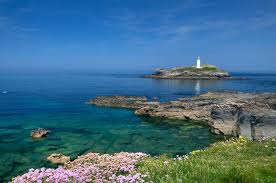 A few years ago Trinity House, which is in charge of all England's lighthouses, decided that Godrevy’s light was no longer needed. A lot of pressure was put on Trinity House not to turn off the regular beam of light.

Now Trinity House has decided to divest itself not simply of the obligation to itself keep the light on, but of the lighthouse itself. The inhabitants of Gwithian, the nearest village, and everyone else in the neighbourhood are desperate to save it. Of course I am too. But it seems inconceivable to me that this iconic structure will be permitted to fall down. Surely The National Trust, English Heritage, Cornwall Council or  some other organisation that protects ancient buildings will have to step in.

Posted by Jessica Mann at 05:32 No comments:

We're always being told about the crisis in publishing. The end of the net book agreement, the growth in  electronic reading,the competition from other entertainment media - whatever the reason, or combination of reasons,authors are receiving smaller advances and  traditional book publishers live in fear of being sacked. A sad situation, but one with a logic behind it - isn't it?

I'm not so sure. Because if all these pessimistic prognostications are accurate, how come that more crime novels than ever before in history are being published? During the last months I have received on average three book parcels a day. The fact that some are duplicates is cancelled out by the fact that there are quite a few crime novels I'm not sent - for example, I was spared from making a fool of myself by failing to identify J.K.Rowling as the true author of a book by "Robert Galbraith", because I never received it.

As I'm not only a reviewer, but this year also a judge for the Crime Writers' Association Steel Dagger Award,  I've been bombarded with books, and my tiny office (or study, or workroom) is filling up with them. A tiny  percentage of them will make enough   money for their author to live on, and consequently enough money for the publisher to show  a profit on. And yet  they come, three or  four a day, more and more and more.......But still, they say there's a crisis in publishing.
Posted by Jessica Mann at 15:56 No comments:


I've mentioned before that I am sent a great many books. There is space to mention about 8 or 9 of them  in my monthly column in  The Literary Review.
My little study (rather an old fashioned word - perhaps I should say office or workroom) fills up quickly, and I have to get rid of  paperbacks, hardbacks and proof copies. Hardbacks  go to a private subscription library in Penzance, and some paperbacks to  the  Oxfam bookshop in Truro, where  I'm told  "nobody wants to buy  hardback thrillers these days". But proof copies come with the injunction "Not for sale or distribution" and quite properly Oxfam won't sell them. Nor ought they to be put  on library shelves.  I can't bear the idea of chucking a book out with the garbage and the very idea of burning books - as they did in Nazi Germany - makes me feel quite sick. So what on earth should  I do with them? Any suggestions gratefully received!
Posted by Jessica Mann at 01:53 No comments:


This picture of "our" lighthouse shows the size of  the waves hitting the south-western coasts of Britain.And the photo of the railway line at Dawlish, dangling in the air because the storm swept its underpinning away, shows why Cornwall feels like an island today. This last was another week in which getting myself to London (as I'd planned) would be so difficult and slow that I cancelled all engagements. The same thing happened twice in 2013 (though the damage wasn't as bad as it is now) and in 2012 too. This time, it will be many weeks, not days, before trains can run west of Exeter. No wonder  so many businesses that start in or  or come to Cornwall leave again. No wonder conferences keep clear;  no wonder an influential medical seminar, started by a Cornish doctor and attended by people from all over the UK and abroad, moved to Bristol last year. Their participants won't come unless they are sure they can leave. And even when everything goes  according to plan, it's  a long,slow journey. It's quicker to get to Edinburgh  by train than to Truro, which  is exactly one hundred miles nearer London.
What's the point of this whinge? Just to say how sickening that so much money is earmarked for the new high-speed link from London to Birmingham. Think how many miles of sea defence that money would buy!

Can you see me?

Fidelis Berlin, who has featured in several of my books and plays a large part in the most recent one, Dead Woman Walking, is an old woman. She is in fact about the same age as me, which I admit because there is certainly no point now (if there ever was a point)  in pretending otherwise, since the truth can so easily be found on line. I don't know who first remarked that old women are  invisible, but rather to my surprise,  it seems to be true. For example: last week,  in a train on the way from Cornwall to London, the inspector came along the coach scrupulously  checking everybody's tickets and rail cards -  or rather,  I should say checking everyone else's. But his eyes passed unseeingly over my seat. I was invisible. I would have minded  being ignored if it hadn't given me an idea. As people say to young journalists, every unpleasant experience can be made into good copy.

An amazing trip to Cairo:  a plane in which there were about five seats per passenger,  and a destination in dire need of jumbo-jets full of tourists. But tourism is in suspension in Egypt,  whose economy depends on it. The American State Department's advice, on the day I went there, was not to go, and so  Americans don't go; the British Foreign Office advice is not to go to some places and go cautiously to others. My unofficial advice is to GO NOW! You'll be welcomed with enthusiasm and be able to negotiate massive price reductions in hotels. The Mena House Hotel, 5 stars and in normal times jam-packed with customers, was completely deserted. When we went there for lunch, ours was  literally the only  occupied table in the whole huge dining room. We wandered round a pyramid almost alone. And most exciting of all, we were able to see the Tutankhamun exhibits in private. I've been in the same room as these treasures three times, at the  London exhibitions in 1972 and 2007, and in the very same rooms in  the Egyptian Museum in Cairo, but could never see more than little sections framed in other visitors' backs. This time my Egyptologist daughter and I were alone in the room with The Pharaoh's gold mask and coffins and jewels and furniture - an amazing and unforgettable experience. Outside the museum, in Tahrir Square, there were tanks, and an unrepaired hotel burnt out in the revolution of 2011, but few people and no trouble.

While I was away The Spectator Magazine  ran a review of Dead Woman Walking. Andrew Taylor called it "a complex and chilling tale"  and said  that "The quality of the writing shines out."  It was a  very nice surprise to find on my return home.
Posted by Jessica Mann at 04:32 No comments:

Back from the Isle of Wight (bad weather, good sessions, both my own and others', and appreciative audiences) and next stop Cairo. I'm going to Egypt to visit my  Egyptologist daughter and her twin daughters. I might even re-read one of my own books, set in Egypt, on the journey. Death Beyond The Nile  features Tamara Hoyland, who was the heroine in six of my novels.  She's a creature born of fantasy, and of her author's discontent, in that she has all the attributes I'd have liked  myself, being brave, beautiful, athletic and above all completely  independent and free. She is an archaeologist and a kind of spy, travelling along the Nile  in an up-market kind of  group. The last book she appeared in was Faith, Hope and Homicide which appeared 21 years ago. In it, Tamara  falls in love. Spying adventures and happy marriage didn't seem compatible, so I wrote no more about Tamara. But her children must be off her hands by now.  I'm toying with the idea of a come-back.
Posted by Jessica Mann at 10:03 2 comments: